The following graph shows 12 positions with connections (this arrangement is called the Frucht graph1): 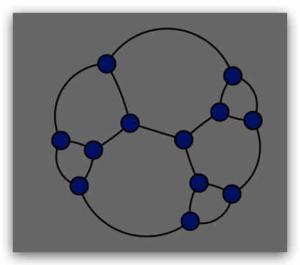 At each of the 12 positions you plan to build one building that is either a quarry, or a factory, or a market.

Every year you have 850 units of energy available. Energy is not transported through the network, but is
available everywhere.

• Every year a quarry produces 200 units of gold and 75 units of diamonds. This costs 100 units of energy.

• Every year a factory uses 70 units of gold and 20 units of diamonds and produces 60 units of jewellery.

This costs 300 units of energy.

Selling costs no energy. The sum of all revenues of all markets is called the total revenue.

Resources cannot be carried over between years. Quarries and factories are not required to use up all resources.

You can decide to forward or destroy an arbitrary amount of resources. The forwarding and the destruction of
resources cost no energy. You also do not have to sell everything that gets sent to a market. You can forward
those resources instead. It obviously makes no sense to forward jewellery through a market instead of selling
it, but it could in principle be useful to forward gold or diamonds instead of selling them, so that they can be
converted to jewellery at a factory.

Quarries and factories can run on an efficieny lower than 100%. Their input, their output, and their energy
usage scale down linearly.

On the next page is a graphical presentation of an optimal solution for a specific fixed arrangement of buildings.

Quarries are yellow, factories are blue, and markets are red. G stands for gold, D stands for diamond, J stands
for jewellery. The efficiencies are shown within the circles.

Your task is to place the buildings, set the efficiencies, and route the resources so that the total revenue is
maximised.

1. Write a program P1 in a programming language of your choice that creates an .lp file and then calls
glpsol to solve the task for a fixed placement of buildings.

2. Since for every location there are three possible buildings, there are 312 = 531 441 many placements of
buildings in total. Write a program P2 that calls your program P1 on each placement and selects the
optimal one. My old laptop can solve 1000 such LPs in roughly 5 seconds, so this computation takes less
than one hour.

3. Take the optimal solution (or one of the optimal solutions, if several are optimal) and draw a corresponding
figure analogously to the example figure on this page and put it into a .pdf file.
Submission format: Put the following into a single .zip file:

2. One of the 531 441 many .lp files that was generated by P1 and that gives the optimal objective function
value.

3. The .pdf file containing the figure of the optimal solution.
If you have trouble with the programming, please try get help from your tutor or your lecturer. Do not copy
another student’s solution!