Using the famous Galton data set from the mosaicData package:

Use the ggplot2 package to answer the followings:

(a) [5 points] Create a scatterplot of each person’s height against their father’s height.
(b) [5 points] Seprate your plot into facets by sex. Add regression lines to all of your facets.

There are multiple ratings for each item. The plot below shows this data: 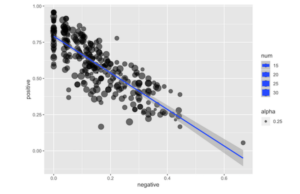 Re-create this plot using the tidyverse and ggplot2, ﬁxing any mistakes you notice along the way.

Read the ﬁle measurements.csv to create a tibble called measurements. (The strings rad, sal,
and temp in the quantity column stand for radiation, salinity, and temperature, respectively.)

(a) [5 points] Create a tibble containing only rows where none of the values are NA and save in a
tibble called cleaned.

(b) [5 points] Count the number of measurements of each type of quantity in cleaned. Your
result should have one row for each quantity rad, sal, and temp.

For this problem, we will be using the data from the survey collected by the United States National
Center for Health Statistics (NCHS). This center has conducted a series of health and nutrition
surveys since the 1960’s. Starting in 1999, about 5,000 individuals of all ages have been interviewed
every year and they complete the health examination component of the survey.

(a) [5 points] We will provide some basic facts about blood pressure. First let’s select a group to
set the standard. We will use 20-to-29-year-old females. AgeDecade is a categorical variable
with these ages. Note that the category is coded like ” 20-29″, with a space in front! What
is the average and standard deviation of systolic blood pressure as saved in the BPSysAve
variable? Save it to a variable called ref.

(b) [5 points] Using a pipe, assign the average to a numeric variable ref_avg.

(c) [5 points] Now report the min and max values for the same group.

(d) [5 points] Compute the average and standard deviation for females, but for each age group
separately rather than a selected decade as in (a). Note that the age groups are deﬁned by
AgeDecade.

(f) [5 points] We can actually combine both summaries for (d) and (e) into one line of code. This
is because group_by permits us to group by more than one variable. Obtain one big summary
table using group_by(AgeDecade, Gender).